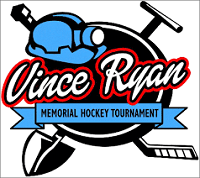 The 29th Anniversary of the Vince Ryan Memorial Scholarship Hockey Tournament will be held March 22rd through 25th, 2018.This tournament is one of the largest recreational adult hockey tournaments in the world.

Every year over 160 teams from across Canada and the United States gather, bringing thousands of players to 10 rinks across the Cape Breton Regional Municipality (CBRM) in Nova Scotia.