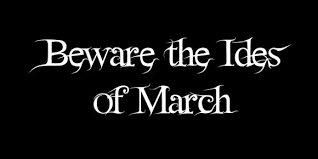 In modern times, the Ides of March is best known as the date on which Julius Caesar was assassinated in 44 BC. Caesar was stabbed to death at a meeting of the Senate.

The death of Julius Caesar marked the end of the Roman Republic and the beginning of the Roman Empire. After this point, Emperors in Rome would rule with absolute power. So this is why Fifteenth of March, the Ides of March, has great significance.