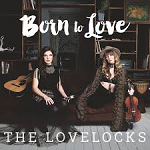 The Lovelocks, Artists of the Week

Mixing soaring vocals, sweet harmonies, and sultry strings, complemented with an infectiously high-energy stage presence is the essence of 2014 Canadian Country Music Association® (CCMA®) Discovery Series winners The Lovelocks (MDM Recordings Inc. / Universal Music Canada), a female roots-country duo comprised of Ali Raney and Zoe Neuman.  Celebrated by RocketHub as “crowd funding pioneers in the world of country music in Canada”, this business-savvy duo has raised over $65,000 dollars to date, funding the recording of both, their debut EP, and their second album Born to Love .

The Lovelocks first became friends over a shared passion for music, which led to writing songs in their living rooms on Sunday afternoons, and eventually, the decision to start a band together.  With the combined talents on fiddle, mandolin, acoustic guitar and vocals, The Lovelocks are woven together with a desire to create music that gives voice to both the bitter and sweet in life.  Perhaps the mystery of their band name may also stem from a shared love of a few old flames (having dated some of the same fellas, ironically before the ladies actually ever met!), but The Lovelocks will never kiss and tell!  Serendipitously, both band members actually learned of the real Parisian love locks at the exact same time, while half way across the world from one another, and thus, the band name was officially born.

Following an incredible response to their performance of “Time After Time” (originally performed by Cyndi Lauper) during their Toronto EP release party earlier this year, The Lovelocks chose to record the song as their newest single. Their very own take on this classic hit includes infusing the iconic song with their upbeat roots country sounds and signature fiddle interplays; “Time After Time” hit Canadian country radio on May 24, 2016.

Describing the sound of their previous single, The Lovelocks share, “This song is so much fun to perform live! “Home Sweet Home” is about two people, maybe friends, partners, or lovers, chasing dreams together, about being loved and loving well, and being ‘home’ to someone in a way that’s really fun and carefree.  Essentially, wherever you are with that person, then that [place] is ‘home’.  This song is the perfect soundtrack for life’s next big adventure!”

Overall, Born To Love is a proud result of creative collaboration with numerous notable talents. The Lovelocks share, “We have poured our hearts into creating our new album, Born to Love, which is a collection of love songs in all of its iterations.  Wherever our listeners are at with love and relationships, we hope they find a few favourites that speak to them.”

The Lovelocks are a dynamic duo, just two city girls who LOVE country music. Their sound is commonly described as a mixture of The Dixie Chicks go Lumineering with a Mumford & Sons-ian alt-country, roots-inspired approach filled with authentic, ‘roots-country’ sound with lots of acoustic instrumentation, including the fiddle, banjo, mandolin, and dobro.

Their February 2014 self-titled debut EP featured the singles “Dance” and “Teardrop Tattoo”, and hit #2 on the iTunes Country charts on the day of release