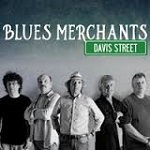 Blues Merchants, Artist of the Week

“The Blues Merchants”, were formed in the mid-nineties and have become one of Cape Breton’s most popular resident bands.

The Blues Merchants continue an East Coast tradition of rockin’ the blues. A unique combination of great original songs and solid blues standards, this group of Cape Breton musicians have a ton of experience making music nearly two decades. In 2000 the band released its self-titled CD, comprised of original songs all written by band members. The recording went on to be nominated for “Best Blues Recording” in the Blues category at the East Coast Music Awards. Over the years the Blues Merchants have performed with and been back up band for such greats as Matt Minglewood, Dutchie Mason, Sam Moon and Wayne Nichloson. Highlights include a main stage performance at the Stan Rogers Festival, Minglefest, and Rock the Dock in Sydney NS opening shows for the likes Kim Mitchell, April Wine and the Stampeders.

In the early 1990s the “Blues Merchants” started out as a house band for a blues night at a local Sydney N.S. bar — Two decades later the gigs and their audience have grown steadily. The five piece band continues to evolve while staying true to their hard working East Coast/ Cape Breton roots with the release of their second CD of original songs titled “Davis Street”. The Blues Merchants style is a mix of rockin’ guitar blues, R & B and well written original songs that have made them one Cape Breton’s favorite bands.

Davis Street,” the newest release from the Blues Merchants, is a wonderful blast of music that pays fitting tribute to former band member Dave McKeough and his wife Donna, who died in a car accident in 2012.

At that time the band already had four cuts for a new CD in place with Dave on lead guitar. These sat on the shelf until this past fall when the band returned to Lakewind Studio and added six more cuts to complete the recording.

There’s even a nice sense of sentiment here as you have Dave’s wailing guitar on four songs and you have the title cuts, a tribute to Dave and Donna, who were longtime residents of Davis Street. The song (written by both Ian and Fred) touches on the friendship of the boys in the band and the welcome felt at the McKeough home.

The Blues Merchants continue to entertain their fans throughout the region.