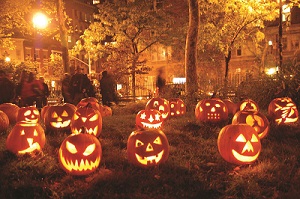 Oak Island – Mahone Bay, NS Legend has it that a huge treasure lies buried on the island in a deep and intricately booby-trapped mineshaft called the “Money Pit”. Visitors to the island have reported encounters with apparitions dressed as eighteenth century soldiers and ghost lights have been seen from the mainland on several occasions.

Old Halifax Courthouse – Spring Garden Road, Halifax Stored in a dark, eerie room in the upper story of the building are pieces of the old Halifax gallows, on which many of the city’s more infamous criminals met their end long ago. Many years ago one of the building’s janitors ran terrified and shaking from the room, swearing he had seen a ghost, and vowing never to return to the room again (a promise he reportedly kept).

Seal Island Light Museum – Barrington, NS It seems things have been going bump in the night at this replica of a lighthouse. Could those eerie noises be a ghost? We invite you to visit on October 28th and 29th from 7 PM to 9 PM and search for yourself. Not suitable for the young and faint of heart.